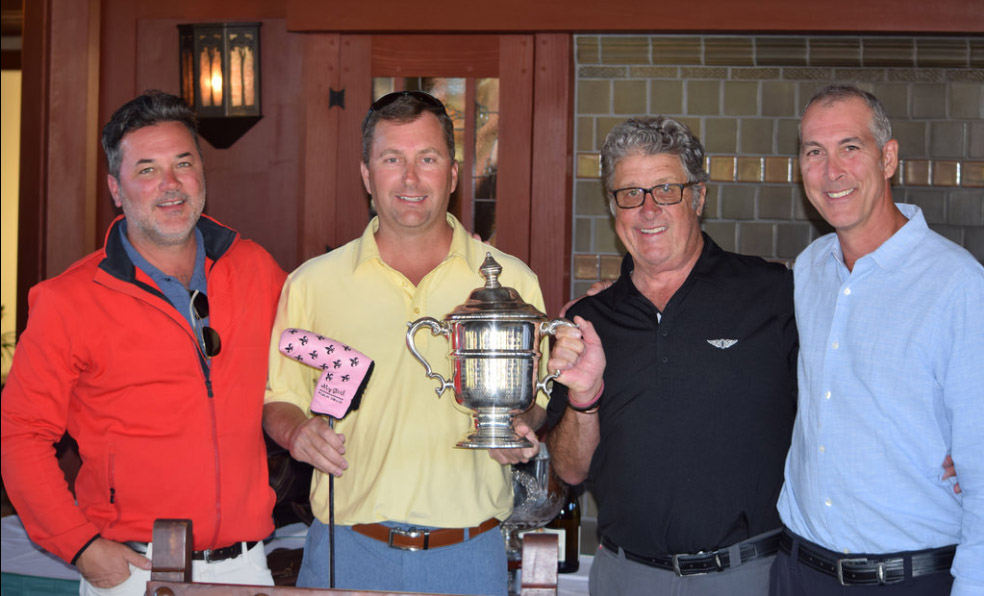 CARMEL, Calif. (October 21, 2017) – Tyler Crawford might never give back the borrowed putter he used to capture the 26th Stocker Cup.

Carmel resident Jeff Britton put together a set for Crawford after the the Indio resident’s clubs didn’t make it to Carmel. Using a put-together set, including a putter from Britton’s wife, Crawford fired a first-round 68 at the par-72 Preserve Golf Club. The pink lady Scotty Cameron putter was covered with fleur-de-lis, which inspired the New Orleans Saints fan.

The champion followed with rounds of 73 and 74 to capture the title at 1-under in his fourth playing of the venerable mid-amateur event. Crawford’s previous Stocker Cups all resulted in top-10 finishes. Earlier this year he won the prestigious Kelly Cup.

“I played my best round today,” the champion said, “though I got clobbered on No 4.”

On the surface, this seems surprising given his stellar opening round where at one point he stood at six under using the borrowed clubs, but Crawford acknowledged that his opening 68 was due to putting using a club he had never played with before.

The double bogey he made on the fourth hole in the final round was offset by four birdies on the day, reflective of stellar ball striking on the challenging Preserve Golf Club layout.

Second round co-leader Billy Williamson of Cincinnati, Ohio and Reid Hatley finished in a tie for second, two back of Crawford at 1-over.

“I’d like to really thank Joe Sanders and Jerry Ledzinski. Joe got me in touch with Jerry who connected me with Jeff Britton. And, of course, without Jeff and his wife’s putter, I wouldn’t have won.” Sanders is a former Stocker Cup champion and is a four-ball partner of Crawford’s.

Colby Harwell and Jason Goble also won the gross team title wire-to wire, but it was the opening 64 that lead the way. The Texas duo won by seven strokes over Patrick Christovich and Andew Rosenberg.

Harwell and Goble also were low net, but are only eligible in one division.

That was okay with everyone at The Preserve, because it meant that George Kelley and partner Joe Deraney won the net division title, the only division that saw come-from-behind winners. Kelley is a co-founder of the Stocker Cup championship and was a longtime friend of the tournament’s namesake, Peter Stocker. Kelley and Deraney carded an impressive 64 to leap into first place. The result clearly meant the world to Kelley, and the assembled tournament field graciously saluted him and partner Deraney, who won last year’s Stocker Cup.

Birmingham’s Steve Hudson won the Sandy Tatum Trophy, for competitors over age 50. Hudson finished in a tie for 10th. The award, named for the highly respected former USGA President, took on special meaning this year since Tatum passed away in June. He left behind a legacy that includes consulting on the design of The Preserve Golf Club (with architect Tom Fazio) and leading the drive to bring San Francisco’s Harding Park Golf Course back to its former glory.