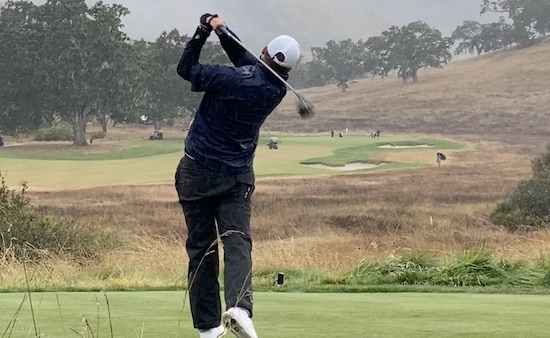 The Stocker Cup is up for grabs, with three players tied at 7-under and just one round left to play. Jason Anthony (67-70), Michael Jensen (66-71) and Bryan Hoops (67-70) all found the rainy conditions that prevailed for most of the day to be more challenging. But all three players adjusted to the weather and avoided trouble – at least for the most part.

Jensen, the former Cal Berkeley golfer, suffered a triple-bogey on the 15th hole but had enough birdies to offset the triple, and then some. Starting on the 10th tee, he birdied 10, 12, and 13 before succumbing to the hardest hole on the course, but birdied 17 to shoot even before coming home in 1-under 35. Anthony, from Fairfield, was a recent semi-finalist in the Crump Cup and his game is in top form. He had four birdies against just two bogeys today for 2-under 70.

Bryan Hoops, of Arizona, made just one bogey today on No. 7. The 52-year-old is a regular at The Stocker Cup, and like his other two co-leaders is seeking his first victory.

Giving chase at 6-under is two-time champion John Sawin of Pebble Beach, who always seems to play well at The Preserve. Three players are tied at 5-under. The low round of the day (and only sub-70 score) went to 2019 champion Joseph Deraney, who is lurking at 4-under. Evidently, the new putter he borrowed from Preserve head professional Riley Ramones is to his liking.

The Cincinnati team of Bill Williamson and Paul Favorito cooled off a bit, but not enough to make them anything but favorites to run away with the gross team title. After a blistering 11-under 61 in round one, they posted 6-under 66 to stand at 17-under for the tournament. That’s four shots in front of Michael Jensen and Preserve member Jack Peat, who stand at 13-under after posting 66 today.

In the Net team competition, Rusty Mosley and Thomas Branch of Georgia took it deep today, firing 11-under 61 to get to 20-under for the tournament. Three teams are hot on their heals at 18-under.

Posting a 6-under 66 that one of the members of his group said looked “easy” Bunker is tied at the top of the first round leaderboard with former Cal Berkeley golfer Michael Jensen. Jensen, who recently competed in the U.S. Mid-Amateur at Sankaty Head on Nantucket Island, posted a bogey-free round thanks to an amazing save on the 9th hole, where his tee shot found the left penalty area.

“That was the save of the day,” said Jensen. “It really kept my momentum going.”

It was Jensen’s second shot from 256-yards out on the par-5 13th that impressed playing partner Matt Pingatore.

“His 3-wood was high, long, and never left the flag,” said Pingatore of Jensen’s shot to the third tier hole location perched treacherously close to the red-staked penalty area. Jensen would two-putt for birdie

Bunker’s 66 was nearly blemish-free, as the Canadian with one of the best golf names ever made a single bogey on No. 15. The hole played toughest statistically today, as it normally does with an extremely difficult putting surface that rejects anything but a perfect shot. Bunker’s bounceback got him right back on track — birdies at Nos. 16 and 17, and a great par save from the left side of the 18th green.

Four players are just a shot back after rounds of 67 — Bryan Hoops and Brian Blanchard from Arizona, Jason Anthony of Fairfield, Calif., and the player who traveled the furthest to get hear, 25-year-old JP Curran of Sydney, Australia.

The shot of the day belonged to Rusty Mosley of Georgia. After starting on the 10th hole and turning in 2-under 34, Mosley proceeded to hole his second shot for eagle on the 442-yard 1st hole slam-dunk style for a guaranteed gross skin. He would go on to shoot 69 and stands three back of the lead.

A full 24 of 48 mid-amateur players in the A-side of the tournament posted rounds of even-par 72 or better today.

Someone tell Paul Favorito he’s a B player! Favorito, partnered with Billy Williamson of Cincinnati, helped his partner’s 69 by a full 8 shots as they teamed for a gross best-ball 11-under 61, which is the lowest Stocker Cup gross best-ball score anyone can remember. Favorito had 66 on his own ball. And get this — the duo both bogeyed No. 18, or they would have been one better.

Tied for the lead in the net competition are the teams of John Sawin and Mark Flynn and Brian Blanchard and Colby Thiele. Thiele, a 7-handicapper, scored three birdies in a row on Nos. 5 through 7. And he got a shot on No. 5. That’s helping the team!

Tomorrow’s second round tees off of Nos. 1 and 10 at 8:30 am, and the 54-hole tournament concludes on Saturday. After a one-year break due to Covid, players are really enjoying the amazing conditions and superb hospitality offered by The Preserve Golf Club.