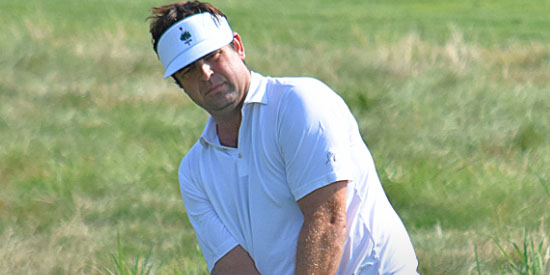 Tug Maude’s re-entry into competitive golf has been smooth, where performance is concerned. Logistically, there was the Thursday morning hiccup of finding his Stocker Cup partner (the format in this elite mid-amateur event pairs an A player, Maude, with a B-level player), but after Maude connected with Richard Tuohey late morning, he was free to light up the difficult Preserve layout with seven birdies and set up a one-shot lead.

Maude, of Atlanta, had two bogeys out of the gate but quickly erased them with birdies at Nos. 3 and 4. He played his final seven holes in 5 under for his opening 67. This is Maude’s Stocker Cup debut, and it comes five months after winning the Walter J. Travis Invitational at Garden City (New York) Golf Club.

Something says he’s just getting warmed up.

Maude was not only playing in his first Travis, but his first individual golf tournament in six years. The 36-year-old gave the mini-tours a try but regained his amateur status but, like many in his stage of life, found little time for competitive golf.

That’s a common storyline at the Stocker Cup. Maude leads Bobby Leopold, a four-time Rhode Island Mid-Amateur champion, by a single shot after the first round on a Preserve course where the greens played just as firm and fast as usual.

Colby Harwell, the 2019 Texas Mid-Am Match Play winner, had a 69 that included a back-nine 32 and is solo third, one shot ahead of Scott Anderson of Columbus, Ohio.

Leopold and partner Tony Thornley, both from England, lead the gross team division after combining for an 8-under 64. Thornley is a member at Preserve Golf Club.

As for Maude, it’s a good thing he and Tuohey connected, considering that at 5-under 67, they’re tied for fifth with Harwell and Kirk Pearson.