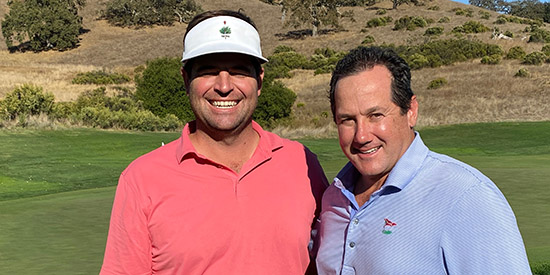 With another red round at the Preserve Golf Club in Carmel, Calif., Tug Maude remains in the lead at the Stocker Cup. Maude, of Atlanta, followed his opening 67 with a 2-under 70 on Friday and at 7 under, has a one-shot lead on Scott Anderson of Columbus, Ohio.

Defending champion John Sawin and Maude have a long golf relationship dating back to being kids in Philadelphia. Sawin called Maude “the first cool kid” to start playing golf, and Sawin soon found himself tagging along to tournaments.

“Tug is the reason I play competitive golf,” said Sawin, who is 4 over and tied for 24th as he works toward a title defense at the Preserve.

Maude did a stint as a professional before taking a hiatus from competitive golf. Sawin and Maude entered the 2017 U.S. Amateur Four-Ball, bowing out in the Round of 16, and Sawin was responsible for getting Maude entered in the Walter J. Travis Invitational in May, a tournament Maude despite being his first individual start in six and a half years. That Maude is leading the Stocker Cup with so little competitive reps under his belt is equally impressive.

“I got him in the Stocker Cup field and no surprise he’s leading here,” Sawin said.

Behind Maude, the heavy-hitters are stacked up. Three men are tied for third at 4 under, including U.S. Mid-Amateur runner-up Joseph Deraney of Belden, Miss., Colby Harwell of San Antonio, Texas and reigning Rhode Island Mid-Amateur champion Bobby Leopold of Coventry, R.I. Deraney had the low round of that group, a 3-under 69 that included three birdies in his first five holes.

Kyle Hudelson, an Oklahoma City, Okla., native who is tied for seventh at 1 under, had one of the impressive back-nine performances of the day after going 3 under from Nos. 10-13, then closing out the day with an eagle on the par-5 17th. He posted a second-round 71.

As for Leopold, he also leads the Net Team division alongside partner Tony Thornley, a Preserve member. The pair reached 17 under with net rounds of 63-64.

Maude and his partner Richard Tuohey, who are thick as thieves two rounds in despite forming a new partnership this week, are 16 under and tied for second with Harwell and his partner Kirk Pearson, a fellow Texan.

In the gross team competition, it’s Maude and Tuohey, of Sausalito, Calif., at the top. The men combined for rounds of 67-64 and at 13 under, have a one-shot lead on two teams.