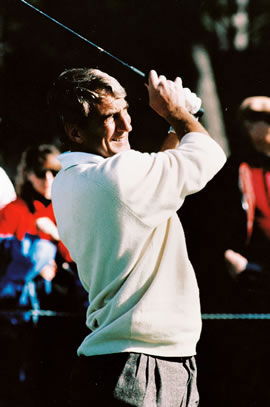 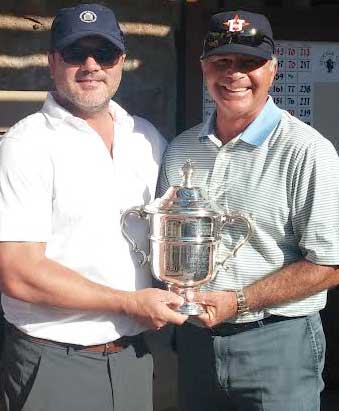 The Stocker Cup Invitational Golf Tournament is held each year in memory of Peter C. Stocker who died in a tragic helicopter accident at Rancho San Carlos near the Carmel Valley in 1990.  Rancho San Carlos has since been renamed the Santa Lucia Preserve.

Peter was born in Cincinnati , OH and educated at Denison University in Ohio and the University of Denver. Peter and his wife Cathy came to San Francisco in the early 1970's. He exhibited entrepreneurial skills early in his career as he developed the internationally recognized "ParCourse" exercise and jogging trails.

In 1974, Peter and his partners Bill Harlan and John Montgomery, founded the Pacific Union Company of San Francisco , a highly successful real estate development firm. Pacific Union developed Meadowood Resort and Merryvale Vineyards in the Napa Valley, Opera Plaza in San Francisco's Civic Center and began the development of what was then known as Rancho San Carlos, a 20,000-acre private ranch near Carmel Valley. In the mid-1980's, Peter received national acclaim for his attempt to build a new downtown baseball stadium for the Giants, which ultimately came to fruition in 1998. He was also the developer of the highly touted Chardonnay Golf Club in the Napa Valley. His visionary talent and inspirational leadership were truly unique.

An avid sportsman, Peter was an accomplished tennis player, skipper of his own racing sailboat, an excellent amateur golfer and a long time member of the Olympic Club. He loved the challenge of the game of golf in every respect.  His passion for golf began at an early age and at one time he had aspirations of becoming a tour professional. He was a devoted father of four children and a loving husband, son and brother.  Everyone who came in contact with Peter Stocker was under his spell; a warm and beguiling smile, movie star handsome, a magical personality and an enthusiastic zest for life - he is remembered and loved by all whom had the privilege and pleasure to have known him.

Forty years ago the San Francisco Bay Area was a hot bed of amateur golf. In recent years, the San Francisco Bay Area, and Northern California in general, has started to make a comeback on the national golf scene. The Stocker Cup has established a prestigious annual amateur golf tournament on the West Coast that has attracted a field of top amateurs from throughout the country and abroad. In 2001, the Stocker Cup became the first annual amateur championship held in the State of California to achieve national stature when the tournament was granted World Amateur Ranking Player Points by Golfweek. It has since been added to the World Golf Rankings and SPAWAR.

The tournament was originally played at world renown Pebble Beach Golf Links, The Links at Spanish Bay and Poppy Hills GC. In 2000, the event moved to its permanent new home at The Preserve Golf Club within the Santa Lucia Preserve near Carmel Valley, California; a spectacular new course designed by virtuoso golf course architect Tom Fazio with Sandy Tatum. Following each year's event, the Stocker Cup Committee contributes to various golf-related charities in memory of Peter Stocker.  According to Sandy Tatum, past president of the United States Golf Association, "The Stocker Cup is a significant tournament for golf and for Northern California. It fills a vacuum. Stocker was the quintessential amateur golfer. He loved golf with a passion. He would have loved this tournament."