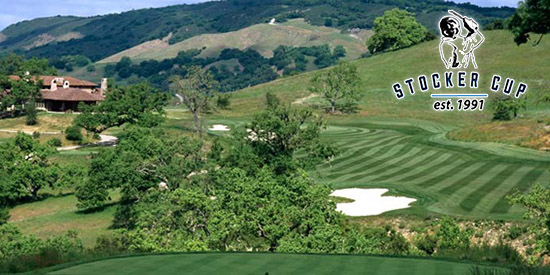 It’s Stocker Cup time once again, and even as much of the field remains familiar, we are guaranteed suspense at the end of three days at the the Preserve Golf Club. With defending champion Tyler Crawford out of the field with an injury, a new champion will be crowned.

That’s not to say the last man standing won’t have experience. There are two past champions in this field in Joe Deraney (2016) and John Sawin (2013), not to mention past and current champions of many of the most important mid-amateur championships in the country.

For many mid-ams, a Stocker Cup victory is the prestigious cherry that makes a stellar amateur season complete. Many in the field of 54 players come into the tournament with state and national wins in their back pocket, looking to cap off their seasons with an even bigger win.

Located in a stunning 20,000 acre nature preserve high above Carmel, the Preserve Golf Club is a par-72 layout designed by Tom Fazio and Sandy Tatum that plays at 7,067 yards from the back tees. The tournament features two simultaneous competitions: An individual championship with 54 of the country’s top Mid-Am golfers, and a gross and net team competition pairing those same golfers with 54 avid golfers in a format similar to the PGA Tour’s AT&T Pebble Beach Pro-Am. The B players include friends of Peter Stocker and the Stocker family, invited friends of A players, as well as Preserve Golf Club members — many of whom graciously share their homes with their partners.

The tournament tees off on Thursday morning and concludes on Saturday.

Ten players to watch in this year’s field:

Herbie Aikens, Kingston, Mass.: Aikens’ latest turn in the headlines was for winning a second Southeastern Amateur title earlier this month. Aikens, 36, is a Massachusetts player who has stamped his name on both the state mid-amateur trophy and the state amateur public-links trophy. Aikens has found continued four-ball success alongside 2017 U.S. Mid-Amateur champion Matt Parziale, a fellow Massachusetts man. The pair has won the Massachusetts Four-Ball two times and won the International Four-Ball in January. Aikens tied for first at the 2014 Stocker Cup, but lost in a playoff.

Jason Anthony, Fairfield, Calif.: This will be a sixth straight Stocker Cup appearance for the 35-year-old Anthony, and he has finished inside the top 11 in each of his previous five appearances. Anthony started the year with his first victory in the San Francisco City Amateur when he defeated 18-year-old Max Ting in the final to chalk up a win for mid-amateurs everywhere. Anthony and partner Randy Haag, a former Stocker Cup winner, recently qualified for the 2019 U.S. Amateur Four-Ball at Bandon Dunes.

Joseph Deraney, Lexington, Ky.: One of two past champions in the field, Deraney got on a roll early in the summer and will carry plenty of momentum into this event. He won the Carlton Woods Invitational and the Timuquana Cup in the span of a week at the start of May, and capped August with a Canadian Mid-Amateur win. The 35-year-old takes dad duties for his three children very seriously. He is the reigning Lexington City Amateur champion.

Clay Guerin, Hoover, Ala.: Guerin is a prominent player in Alabama who won the Birmingham National Invitational in a playoff in June against the man, Brett Boner, who would go on to finish runner-up at the U.S. Mid-Amateur. Guerin’s victory came weeks after he had partnered with Will Swift to win the Alabama Four-Ball in a 21-hole final (Guerin and Swift had birdied the 18th to force extra holes). If there’s something to learn from this, it’s that if the Stocker Cup goes down to the wire, put your money on Guerin.

Reid Hatley, Hayden, Idaho: Hatley is a seasoned USGA competitor, with USGA starts dating back to the 90s when he played the U.S. Junior. The 37-year-old made his Stocker Cup debut a year ago and finished runner-up. Hatley has long been a dominant player in the Pacific Northwest, and earlier this week was named the Washington Golf Association Men’s Mid-Amateur Player of the Year for the fourth consecutive time after a year in which he won both the Washington State and Pacific Northwest mid-amateur championships, was a quarterfinalist in the PNGA Men’s Amateur, and finished third in the Washington State Amateur. He also qualified for the U.S. Mid-Amateur and finished tied for sixth in the Mexican Amateur.

Bryan Hoops, Chandler, Ariz.: Hoops is an Arizona golf stalwart who won his second Arizona Mid-Amateur this summer. It was the latest Arizona Golf Association state title for Hoops, who last won the Mid-Amateur in 2016 on the way to being named the AGA Player of the Year. Hoops is a veteran of more than 10 USGA championships – which he collectively names as his greatest golf moments – and most recently played the U.S. Mid-Amateur in September. He missed the match-play cut.

John Sawin, Pebble Beach, Calif.: Sawin is the other past champion in this field. An accomplished mid-amateur who played college golf at Princeton, Sawin now works as the vice president and Director of Golf at Pebble Beach but still finds time to maintain his own game. In addition to his Stocker Cup victory, Sawin also won the 2014 Pennsylvania Amateur, a significant feat in Nathan Smith country. He was runner-up at the 2016 Crump Cup.