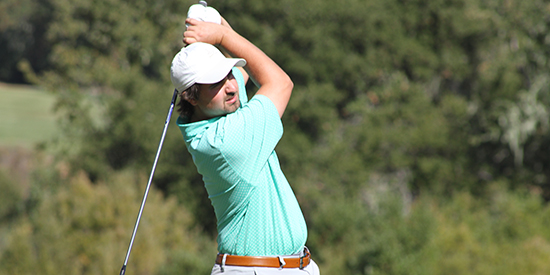 CARMEL, Calif. (Oct. 26, 2018) – On a picture-perfect day at the Preserve Golf Club, the scores were as good as the weather. Sixteen players posted rounds under par, forcing the leaders to play their best golf to stay ahead.

First-round leader Brian Blanchard posted a second-round, 2-under-par 70 to put himself in solo first place with 18 holes left to play. The 26-year-old software engineer from Scottsdale, Ariz., had to grind to turn around a slow start. Sitting at 2 over on his round after four holes, Blanchard knew he needed some magic to stay at the top of the leaderboard.

“With three-day events like this, it’s all about weathering the one tough day,” Blanchard said. “Luckily I was able to stick with it and make those big shots when I needed to.”

Those big shots turned out to be huge shots. He carded two eagles during the round. His first came on the par-5 eighth, and the second came late on the 558-yard, par-5 17th. After his up-and-down round, Blanchard has a one-shot lead at 7-under par for the event.

Patrick Christovich of New Orleans—who posted his second-consecutive 3-under 69—sits in a tie for second place at 6 under. The four-time Louisiana Mid-Am Champion had just one blemish on his scorecard, a bogey on the difficult par-4 15th. Outside of that, he birdied his first hole of the day, the short par-4 10th, and added birdies later on Nos. 13, 7 and 8 to cap off a solid round.

Tied with Christovich is Derek Meinhart of Mattoon, Ill., who posted a 4-under 68 that brought him to a two-day total of 6 under. Meinhart took advantage of back-to-back birdies on Nos. 13 and 14 to break out of the big group of players at 2 under after the first round.

Jonas Mikals of Truckee, Calif., made a big jump up the leaderboard when he matched Meinhart’s 4-under 68 to move into fourth place at 5 under for the tournament.

“This is one of those courses that really rewards you if you hit your approach shots in the right place,” Mikals said. “That was the difference between yesterday and today. I was giving myself the right putt to try to make birdies.”

In the race for the Tatum Cup, awarded to the player aged 50 and over, Roger Newsom of Virginia Beach, Va. has a three-shot lead over William Mitchell of Atlanta, Ga. Newsom is currently 3 under through two rounds and in 8th place overall.

In the team competition, Championship Division leader Brian Blanchard and partner Daniel Licursi of Chandler, Ariz., kept the momentum rolling from their dominant first-round 10-under-par 62, and followed it up with a 5-under 67 that them a 2-shot lead heading into the final round.

Sitting in second place in the Gross Team competition is Bobby Leopold of Coventry, Calif., and Tony Thornley of Rancho Santa Fe, Calif., who carded eight birdies and an eagle en route to a 7-under round. Their 66-65 start puts them at 13 under for the event.

In third place is Jason and Jack Anthony, the father-son duo from Fairfield, Calif. They notched a 5-under-par 67. Jason—Jack’s son—took advantage of his father’s three birdies on Nos. 4, 12 and 15, to keep them in contention.

Jonas Mikals—who made a charge in the Championship Division—and partner Anthony Fierro of Denver are also chasing the leaders. Fierro managed a 1-under 71 on his own ball. That team finished with a second-round 7-under 65 and now sits in a tie for fourth at 11-under par.

Matching them through two rounds is the team of Daniel Buchner and Nicholas Bock of Tustin, Calif., who shot a 34-34 for a 4-under round. With Buchner leading the way with his second consecutive 70, their team is primed to make a move in the final round with a good round from Boch.

In the team Net division, Meinhart and partner Alan Dunckel kept their lead with a second-round 7-under-par 65, bring them to 18-under par total. Tied for second are the teams of Buchner and Bock and Leopold and Thornley each at 16-under par.